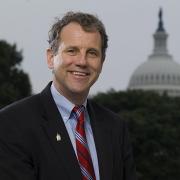 ““Health care decisions should be made by women and their doctors – not by their bosses.”  1

“Among our many shared priorities, we must work together to ensure that Israel can defend itself against growing threats to its security. On Israeli Independence Day and every day, we must continue to remember that there should be no daylight between the U.S. and Israel when it comes to our common defense. That’s why I’m sponsoring the Iron Dome Support Act.”  2

Senator Brown has authored two novels: Congress from the Inside: Observations from the Mahority and the Minority, and  Myths of Free Trade: Why American Trade Policy Has Failed.

He was an Eagle Scout

His wife, Pulitzer Prize-winning journalist Connie Schultz, wrote ...and His Lovely Wife, describing her experiences as a spouse of a U.S. Senate candidate.