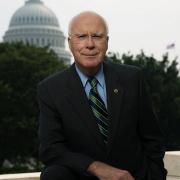 “One thing we all should agree on is that availability of birth control has improved women’s health and reduced the number of teen pregnancies and the rates of abortion.  This should be applauded.”  1

"No one here doubts our commitment to Israel’s security, or Israel’s right to defend itself from Hamas rocket attacks… Hamas used the ceasefire to amass more powerful and longer range weapons.  Its actions should be universally condemned, Hamas’ unilateral decision to break the ceasefire was deplorable.” 2

At 34, Leahy was the youngest and only Democrat elected to the U.S. Senate from Vermont.

Leahy is a Grateful Dead and U2 fan.

As a Batman fan, he was asked to do a voice-over in Batman: The Animated Series episode Showdown as the Governor of the Utah territory.