Submitted by JAC on Fri, 03/22/2013 - 12:00am
Gail Yamner, March 2013
Over the past few months, JAC heard our members and responded. For years we have mentioned gun legislation in passing but this time is different. This time it is more urgent and we are no longer sitting on the sidelines.  On March 19th a group of very concerned women and men gathered in DC to express our support for gun violence protection legislation and demand action.  After Columbine, Virginia Tech, Arizona with Gabby, Aurora, we agonized and sat by. Then Newtown happened and we could no longer ignore the tragic consequences of guns in the wrong hands. We now know that no community is safe under our current set of laws.

When recent polls showed that over 90% of the American public, including gun owners, support background checks and sensible gun safety laws, we thought the legislation to keep our families safe would pass. We were wrong. Strong lobbying and fear have permeated the sensibilities of many Members of Congress. So March 19th marks the first day of JAC’s commitment to be a part of the demand for gun violence prevention.

We began with a panel made of some of the most significant advocacy groups on the issue. They are on the frontlines and need our support.

The panelists spoke about the myths that the gun lobby continue to spin. You hear them speak of a federal gun registry.  In bacground checks there can be no federal registry due to an existing law.The background checks will search a database where criminals and those with documented mental health issues and domestic violence offenses are stored. If someone is in that category, the license will be denied. But if one is not a felon, the license will be issued. They also spoke about the fact that current law exempts private sales from background checks. That means that 40% of those will have no checks. Do you want 40% of people to skip airport security? And they stressed no one is taking away your right to own a gun. Without background checks, guns will continue to fall into the wrong hands.  We submit to background checks for credit cards, mortgages, and jobs.  Why is this so different?

Our members were so involved that some almost agreed to skip dinner for more Q&A.  A question by one member sent chills down the spines of fellow participants.  If so much legislative hesitation is in dear of NRA monetary action against them, how much should they price the life of a child, a parent, a consituent, a US citizen?  $100? $1,000?

We had our usual omelette dinner and mingled with 11 Members who spoke with us in a personal setting. All were passionate on our cause and sid our presence had the power to effect change.

The next day we started early on the Hill. We met with 50 Members or their legislative staff. We urged them to pass the three bills. We asked how we could be partners and how we could reach out to those who were undecided and negative on this issue.

We heard the same message over and over:

Call, email, write letters, visit. WE NEED TO HEAR YOU. We need you to drown out the other voices.
Over the holiday recess, go to Town Hall meetings and speak up. Be part of it. Don’t wait for another tragedy - in your own backyard or that of a fellow American.

It does not matter if you live in a remote area or an urban one, we are in this together. We have to come together and say, “enough”. No more shootings of innocents. No more shatterings of lives. It is up to each of us.

JAC has just started. Join us. Support us. Follow us on Facebook and Twitter. When you get an alert, make sure you call in and ask 10 others to do the same. Your voice must be the loudest - make them hear you. Make them vote to save lives and protect us all. 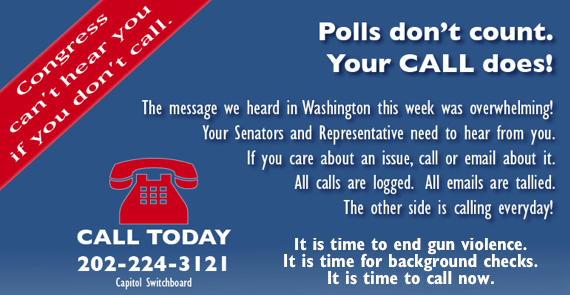