In case you missed it, here is the 2013 mid-year report on state reproductive rights legisation from the Guttmacher Institute. The assault continues, but there are some positive results as well.

In the first six months of 2013, states enacted 106 provisions related to reproductive health and rights; issues related to abortion, family planning funding and sex education were significant flashpoints in several legislatures. Although initial momentum behind banning abortion early in pregnancy appears to have waned, states nonetheless adopted 43 restrictions on access to abortion, the second-highest number ever at the midyear mark and is as many as were enacted in all of 2012.
However, this year is notable also for positive action on other reproductive health issues in a handful of states, with important new provisions enacted to expand access to comprehensive sex education, expedited partner treatment for STIs and emergency contraception for women who have been sexually assaulted.
Abortion Restrictions:
In the first six months of 2013, legislators enacted 43 provisions aimed at restricting access to abortion. Although this is significantly lower than the record-breaking 80 restrictions that had been enacted by this point in 2011, it is the second-highest total on record (see chart below). 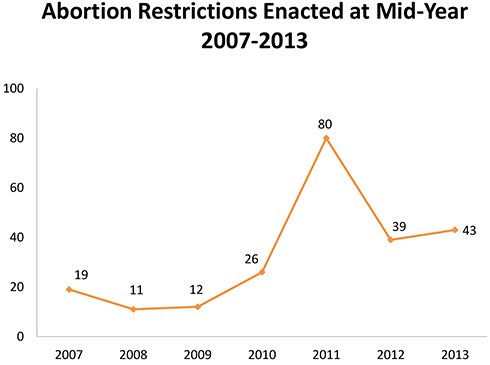 Early in the 2013 legislative year, it appeared that anti-abortion activity would focus on banning abortion early in pregnancy, either by declaring that personhood begins at the moment of conception or by banning the procedure outright. Indeed, provisions banning early abortion were enacted in two states in March alone: First, the Arkansas legislature overrode a veto by Gov. Mike Beebe (D) to ban abortions occurring more than 12 weeks after a woman's last menstrual period; in May, a federal judge temporarily blocked enforcement of the law. Later in March, North Dakota enacted a ban on abortions occurring after a fetal heartbeat is detected, which generally occurs at about six weeks after a woman's last menstrual period; although a legal challenge has been filed, the law is scheduled to go into effect in August.
Although the momentum for banning early abortion appears to have slowed, the same cannot be said for bans on abortion later in pregnancy. Legislation to ban nearly all abortions performed at or beyond 20 weeks postfertilization (the equivalent of 22 weeks after the woman's last menstrual period) has been enacted in Arkansas and North Dakota this year. (Notably, these two states also moved to bar abortion early in pregnancy). These provisions are based on the spurious belief that the fetus can feel pain at that point of development. Including Arkansas and North Dakota, bans on abortion at or after 20 weeks have been enacted in 10 states, while an eleventh, Arizona, bans abortion at 18 weeks postfertilization; enforcement of three of these provisions has been enjoined pending legal challenges (see State Policies on Later Abortions). In addition, the Texas legislature is continuing a high-profile debate on a similar proposal, and a measure that would ban abortion at or after 20 weeks nationwide was adopted by the U.S. House of Representatives in June, although it has no chance of becoming law.
Moreover, several states returned to familiar territory and approved a plethora of restrictions that, while stopping short of banning abortion, would nonetheless significantly hamper women's access to the procedure.
Family Planning Funding
Although the majority of state legislation hostile to reproductive rights focused on abortion in 2013, two states acted to limit access to family planning services. Ohio and Oklahoma moved to bar family planning providers from being able to receive funding that flows through the states' treasuries. Oklahoma's budget excludes family planning providers from being able to receive state family planning funds along with Title X dollars or federal maternal and child health or social services block grant funds. Ohio established a priority system for allocating state or federal funds (including Title X dollars) that puts family planning providers at the end of a long list that includes health departments and community health centers. These moves continue a disturbing trend that began in 2011. 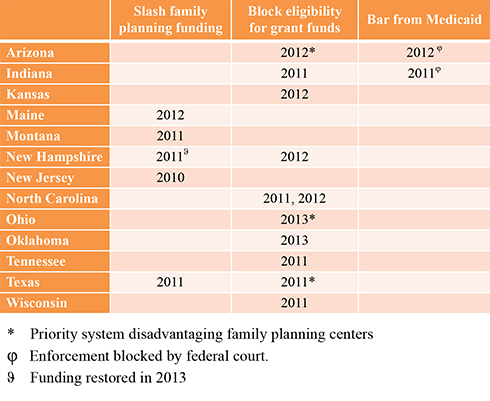 At the same time, states and courts took steps to protect access to family planning services in three states during the first half of 2013. New Hampshire's budget reversed the 57% cut to family planning funding adopted in 2011, restoring funds to their previous level. Federal courts, meanwhile, sided with the Obama administration and blocked provisions adopted in Arizona and Indiana that would have excluded family planning providers that had any association with abortion from being able to participate in the massive Medicaid program (see Besieged Family Planning Network Plays Pivotal Role).
Positive Movement on Prevention
Five states took positive steps during the first half of the year by enacting measures that expand access to comprehensive sex education and reproductive health care.

Read the full report at the Guttmacher Institute