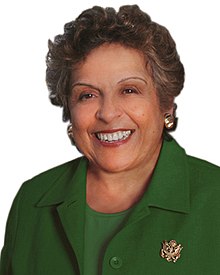 "Three percent of Planned Parenthood’s work involves abortion, a service that is legal in this country and is not supported by taxpayer dollars. While people may disagree over abortion policy, we cannot allow our differences to undermine the other services provided by this irreplaceable network" 1

In 1987 became the first woman to lead a Big Ten school a the Chancellor of the University of Wisconsin - Madison.

Served as President of the Clinton Foundation from 2015-2017.

Awarded the Presidential Medal of Freedom by President George W. Bush for her "leadership and determination to ensure that all Americans can enjoy lives in hope, promise and dignity."