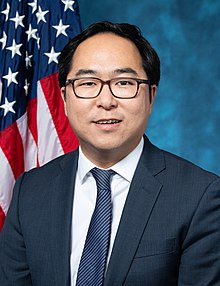 “I'm proud to have voted to pass two important bipartisan [gun] bills through the House that will make our communities safer. These bills will ensure universal background checks and close the same loophole that helped lead to the tragic Charleston shooting in 2015” 1

"As a former national security official in Obama’s White House, I understand that Israel’s security is vital to America’s national security interests. Israel is a thriving democracy in a troubled region and has been an essential partner to the United States over the past seven decades." 2

He is a Rhodes Scholar, and studied international relations at the Magdalen College, Oxford.

Served as a civilian advisor to General David Petraeus during the War in Aghanistan.

First Democratic member of Congress of Korean descent, and just the second overall.