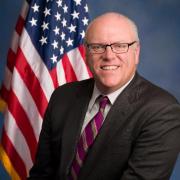 “One of the best things about the Affordable Care Act is the focus on keeping Americans healthy. Today’s decision to require insurers to cover preventative health services for women underscores this commitment.”  1

“Israel is an ally of the United States and I support a deep, enduring relationship.” 2

When he was an assemblyman in Albany, NY, he played guitar and and sang with fellow assemblymen in a band called the Budget Blues Boys.

He once performed at a USO concert with Bruce Springsteen guitarist Nils Lofgren.