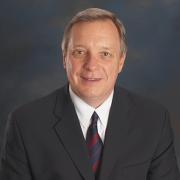 “My support for Israel is strong, as is my commitment to peace in the Middle East. Israel remains an important U.S. ally in the Middle East and the only stable multi-party democracy in the region. The strong and steady friendship between our two countries is built on a solid foundation of shared values, mutual support, and trust, and is in the fundamental interest of both nations.” 1

“Throughout my 20 years as an elected official, I have strived to be a leader in the fight to protect women’s rights. In addition to preserving women’s reproductive rights, I have fought cuts in family planning funding and supported the coverage of contraceptives in health insurance programs.” 2

Durbin was an intern in the office of former Illinois Senator Paul Douglas during his senior year in college.