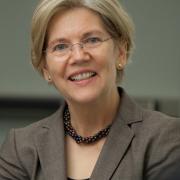 “To me, it is a moral imperative to support and defend Israel, and I am committed to ensuring its long-term security by maintaining its qualitative military edge. Israel must be able to defend itself from the serious threats it faces from terrorist organizations to hostile states, including Iran, Hamas, Hezbollah, and others.” 1

“Women also must have the full range of reproductive health care options available to them. This includes access to contraception, maternity and newborn care, and safe abortion services. At a time when a minority in this country wants to cut off such access for women, it is important to speak out to protect a woman's right to make decisions about her body.” 2     http://elizabethwarren.com/issues/women”

“The decision to terminate a pregnancy is not easy for any woman, but it is a decision that only she can make. A woman should be able to seek guidance from people she trusts, including her doctor and her priest, pastor, rabbi or other religious leader, without interference from the government.” 3

In 2009, the Boston Globe named her the Bostonian of the Year.

Warren was the first professor in Harvard's history to win the law school's The Sacks–Freund Teaching Award for a second time.