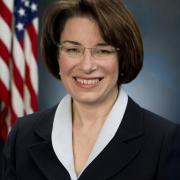 “America and Israel are close allies whose interests in the Middle East and around the world remain strongly aligned.” 1

“I believe that the United States must reinforce its commitment to leading a meaningful peace process of direct negotiations between Israel and the Palestinians. With dialogue, patience, and resolve, our ultimate goal of peace through the region can be realized.” 2

Her senior essay in college, published as the book "Uncovering the Dome," chronicles the 10-year-history behind the building of the Hubert H. Humphrey Metrodome and is still used at colleges and universities across the country.

She has been named by The New York Times as one of the seventeen women most likely to become the first female President of the United States.

She is the first woman to be elected as a senator for Minnesota.