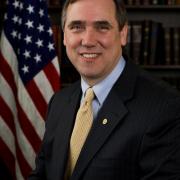 “As a stalwart advocate for Israel’s security, I understand Israel's need to defend itself from terrorism.  No country in the world would tolerate attacks across its border, on its civilians, without responding.”  1

“A nuclear-armed Iran would be a grave threat to the United States, to Israel, and to ongoing global efforts to halt nuclear proliferation.” 2

“Our bosses don’t belong in our bedrooms.  Contraception is a part of basic essential health care for women and it should be a decision that women make with their doctors, not something that their boss decides for them. It’s time to stand up and say it’s not your boss’s business!” 3

Merkley spent a summer during college hitchhiking around Israel.

He was the first in his family to attend college.