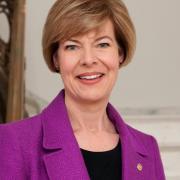 “Every woman should have access to comprehensive, affordable health coverage and should be able to make the health care decisions that work for her and her family.” 1

“I’m very proud of the moment we’re at right now, where there has been upper level strategic cooperation” between U.S. and Israeli militaries and intelligence services.” 2

“Israel is our most important friend and ally in the world, but certainly in the Middle East.” 3

Baldwin was 6-years-old when she first visited Israel.

She was raised by her mother and maternal grandmother, who were Jewish.